Many are turning to Michael Jackson's songs and message during this time of crisis. This is a thread to list them. 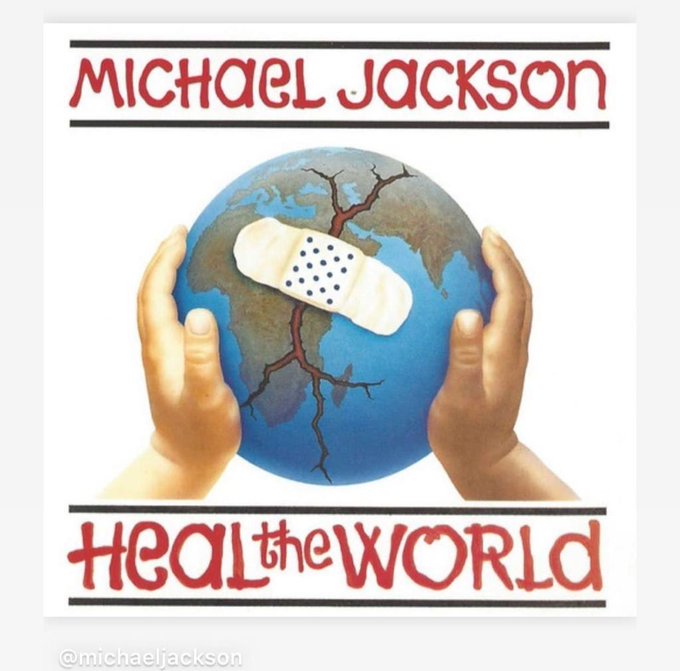 “The Black tradition is a tradition of soul, which is a gift of love and joy. Soul is the most precious thing you can share, because you’re sharing yourself and the world needs that gift now more than ever.” – Michael Jackson 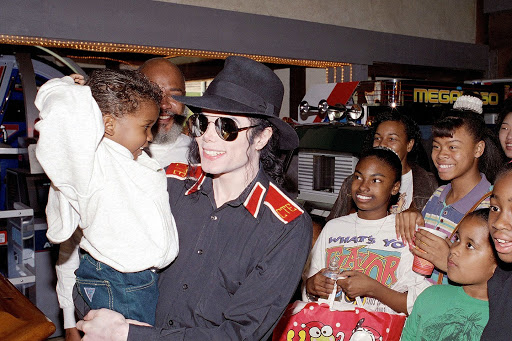 Hope all is well. Let's heal the world and make it a better place. Be there for those who maybe in need during these trying times. So far 4 employees at the hospital where I work have been tested positive for the COVID-19 virus, thank GOD I am still in the negative. Everyone please try to stay healthy and be safe out there. It's all for love and this too shall pass. Blessings to all

My most attended Theatre show and longest running West End show in the HIStory of London's Lyric Theatre, 'THRILLER LIVE' has become the latest casualty of the #coronavirus outbreak. A very sad day in for the arts and no doubt others will soon be announcing their departures from the city. A huge shout out to it's founder Adrian Grant for bringing an astounding musical story to life and ensuring the essence of Michael Jackson's magic was well and truly captured within each and every performance. I've never seen a show with so much audience participation, dancing and happiness. Something tells me this isn't the end for THRILLER LIVE.

Think this is appropriate.

The MJCast is proud to follow in the footsteps of #MichaelJackson by supporting
@WHO
though a donation to their #COVID19 Solidarity Response Fund, made possible by your purchases at http://themjcast.com/shop & through our sponsorship by http://CrackCorn.com/themjcast.
-The MJCast 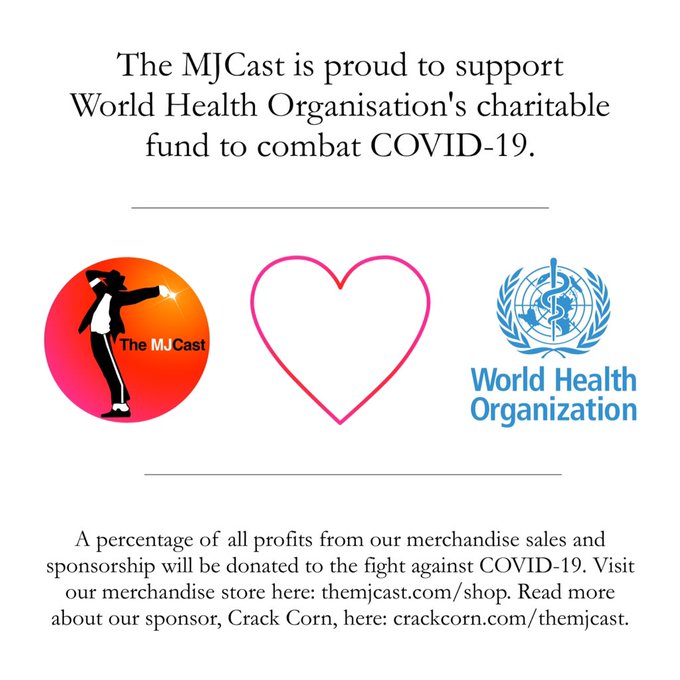 Ed Durden
@777rellirhtjjm
What the universe might say:
He tried to show you how you should treat the world and you shrugged it off. You turned your back on him, you took him for granted and you bullied him to death. And look at you now. I suggest you go back and listen to him. He was right all along. 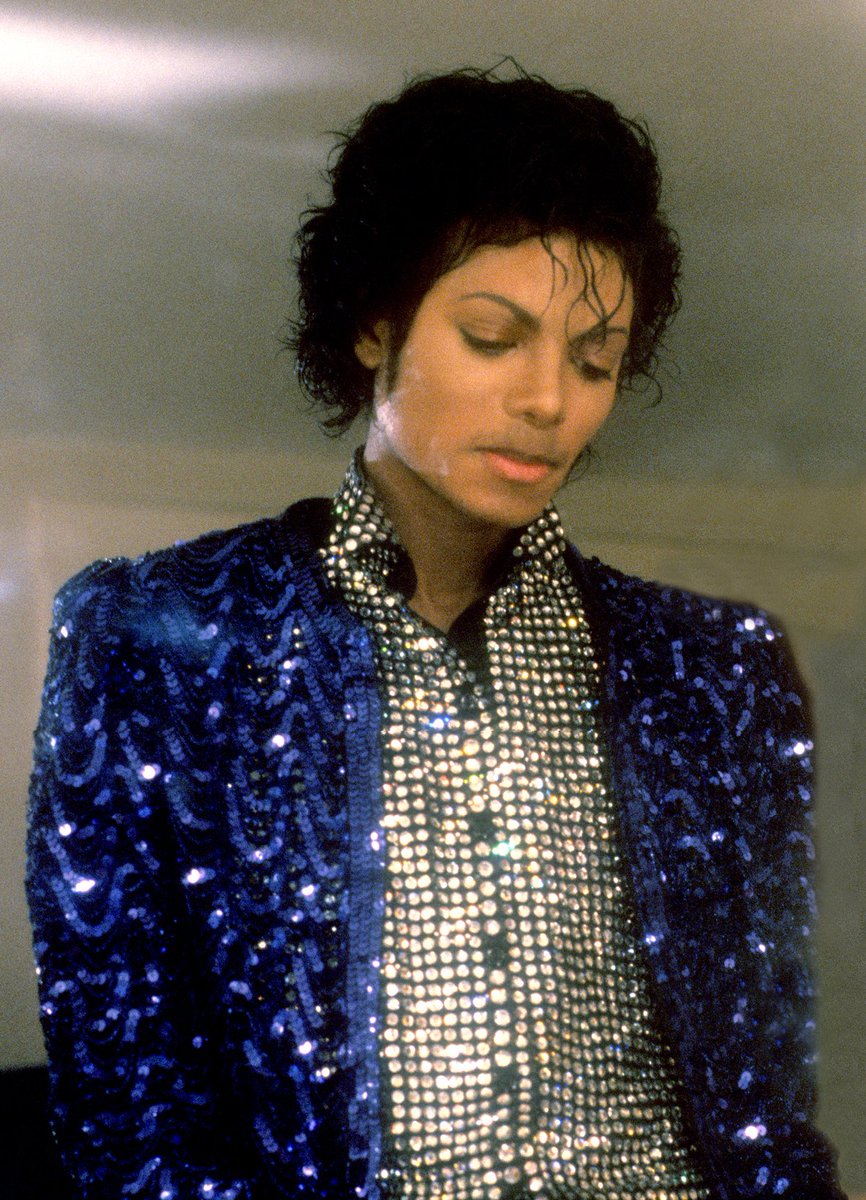 In my country, these celebrities all came together online to raise funds for the COVID 19 crisis affecting our country. They raised more than ₱200M. They chose MJ’s song to close.

Lionel Richie Is Considering Bringing Back ‘We Are The World’ For Victims Of Coronavirus
By JAMIE SAMHAN.

It has been 35 years this month since “We Are the World” was recorded by over 40 stars to raise money for African famine.

The song ultimately raised $63 million for the cause and now Lionel Richie, who wrote the song with Michael Jackson, thinks it could be time for another release.

Richie has considered writing a new song but told People the same words keep coming out.

“Every time I try and write another message, I write those same words,” he said.

He added, “Two weeks ago, we said we didn’t want to do too much [about the song] because this is not the time to sell an anniversary. But the message is so clear.”

A version of “We Are the World” was released 10 years ago to assist with the earthquake in Haiti.

The “American Idol” judge spoke about writing the song with Jackson, particularly the chorus line “There’s a choice we’re making, we’re saving our own lives.”

“That line,” he noted, “came about as Michael and I were sitting there talking. We said, you can either say, ‘I’m saving my life’ or ‘We’re saving our lives.’ ’We Are the World’ is a statement we wanted to make. What do we do to save our own?”

Richie also mentioned the passing of his good friend Kenny Rogers. “I must admit, every once in a while, God has to do something to get us back on track,” he said.
Top

MJJJusticeProject
@MJJJusticePrjct
The Michael Jackson Estate today announced that it is donating $300,000 to coronavirus response efforts to help three communities that have been severely impacted by the Covid 19 virus. Broadway Cares, Three Square…
Top

The Michael Jackson Estate today announced that it is donating $300,000 to coronavirus response efforts to help three communities that have been severely impacted by the Covid 19 virus. Broadway Cares, Three Square Food Bank (Southern Nevada’s largest hunger-relief organization) and MusicCares will each receive a $100,000 donation.

“This virus strikes at the heart of the communities we are close to,” said John Branca and John McClain, co-executors of the Estate of Michael Jackson. “We learned today that the legendary Manu Dibango [a key influence on Jackson’s hit ‘Wanna Be Startin’ Somethin’) passed away from the virus. Other performers and support staff in music and on Broadway are sick or have been left without work and are facing an uncertain future. And in Las Vegas, which has been so welcoming to Michael Jackson, the entire city has been shut down leaving thousands of workers and their families devastated and without an income.

“Michael’s spirit of generosity and helping others during his lifetime is legendary. These donations are inspired by him,” they concluded.

In New York, the Estate is answering the challenge made by more than 20 Broadway producers who are matching up to $1 million in donations, doubling the impact of contributions to Broadway Cares/Equity Fights AIDS’ COVID-19 Emergency Assistance Fund. Jackson loved attending Broadway performances and the Estate and its partner, Lia Vollack Productions, continue to look forward to welcoming audiences to MJ the Musical later this year.

“With every passing day that theaters remain dark, entertainment and performing arts professionals face unprecedented and immediate challenges,” said Tom Viola, executive director Broadway Cares/Equity Fights AIDS. “This incredibly generous donation from the Michael Jackson Estate will help ensure those onstage, backstage and behind the scenes get lifesaving health care, emergency financial assistance and counseling during and after this crisis.”

In Las Vegas, the Estate’s donation will provide 300,000 meals to the needy, and help to maintain Three Square Food Bank’s supplies, the largest foodbank in Southern Nevada. Since opening in February 2013, Michael Jackson ONE, produced by Cirque du Soleil and the Estate of Michael Jackson, has been one of the most popular shows in Vegas. “Before the pandemic, 1 in 8 Southern Nevadans lived in a food-insecure household and that number will increase exponentially with the displacement of thousands of workers in our community. Thank you to the Estate of Michael Jackson for stepping up to help children, families, veterans and senior citizens who may need help now more than ever,” Michelle Beck, Chief Development Officer.

The Recording Academy and MusiCares will support the music makers who Michael Jackson worked with and loved in a time where the industry is being challenged at every level from the virus.
Top

“Michael’s spirit of generosity and helping others during his lifetime is legendary. These donations are inspired by him." - John Branca and John McClain, MJ Estate executors
Top

KTNV Action News
@KTNV
The #MichaelJackson estate says it's donating $100K to
@threesquareLV
as part of a larger donation to help people in the #entertainment industry hurt by the #coronavirus pandemic. #LasVegas

From the Estate ; Hi #MJFam:

We hope that this finds you healthy and safe during these uncertain ties. Feeling connected to a community while physically distancing is one of the most important things that you can do to help navigate the anxiety around CoronaVirus. The Estate has created a new “Heal The World” video specifically focusing on the current world crisis which will be shared on Facebook as a watch party, and wants to make sure that all of you have the opportunity to join and connect with other fans during this time. Michael’s music brings people together in a unique way, and this video watch party will be another way to connect with your fellow fans and feel comforted in this time. For anyone who hasn’t seen it the announcement and a short trailer can be seen on any of Michael’s social media pages (Facebook Twitter Instagram).